I personally find it much easier to learn new things by looking at a working system; as opposed to getting a new system up-and-running. Probably a hang-over from my childhood days dismantling anything that works…

In this article, I am sharing the quickest way to get a small jsp page connect to mysql instance, both running on docker containers.

For purposes of this article, I am assuming:

Check if the server is up and running

Look for “mysqld : ready for connections”

At this point, not only is the mysql-server up, it should also have a new database called ‘TestDB’. You can verify that by running below commands:

In the MySQL client prompt, run:

The TestDB database was created for you because there is a ‘init’ sql file in the ./startup folder. The mysql-server container executes all the files in that folder as part of initialization.

Setting up the jetty side

Verify jetty is up by checking the following:

Since there is no ROOT.war distributed, there should be a context listing page with no apps deployed. Jetty is checking for webapps in the ./webapps folder

Now deploy a bare-minimum webpp consisting of a index.jsp connecting to a DB and dropping/creating/listing the table row count.

This should create and copy over a ‘war’ file to the ./webapps/ folder

Check if the war was successfully deployed using : 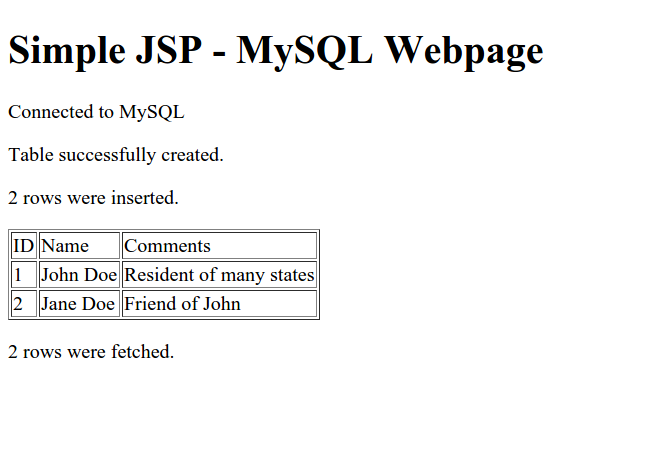 Accomplishing the container wiring through ‘docker-compose’

First verify that docker-compose is installed properly. Use this link to get you set-up.

Let us kill the existing containers before we can try out the docker-compose version of the application.

If you used the non-daemon version, you will clearly see when the system is ready to accept requests. You can shutdown the servers by Ctrl-D.

Alternatively (if you want to run everything as a daemon)…

In this case, you would need to shutdown the servers using